The UN’s weather agency on Tuesday December 13  announced the highest wave on record – a behemoth that towered 19 metres (62.3 feet) above the North Atlantic.

Scrutiny of data sent back by an automated buoy showed a monster wave rose at 0600 GMT on February 4, 2013 at a remote spot between Britain and Iceland, the World Meteorological Organization (WMO) said.

‘This is the first time we have ever measured a wave of 19 meters. 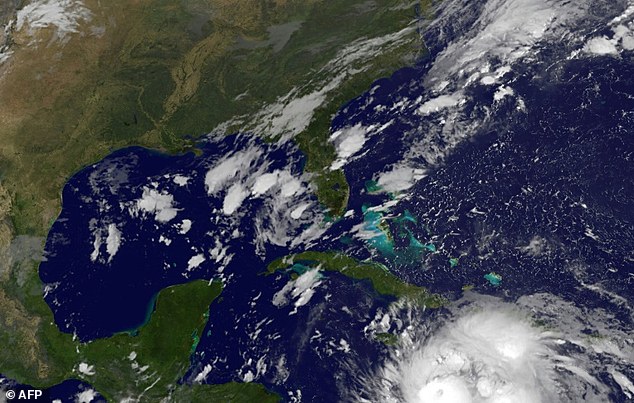 ‘It is a remarkable record,’ WMO deputy chief Wenjian Zhang said in a statement.

Taller than a six-story building, the mighty wave occurred after a ‘very strong’ cold front had barrelled through the area, producing winds up of 43.8 knots (81 kilometres, 50.4 miles per hour).

The previous record height for a wave was 18.3m, notched up in December 2007, also in the North Atlantic.

Automated buoys are vital tools for oceanographers, sending back data on sea currents, temperatures and swells for seafarers, climate researchers and others.

‘We need high quality and extensive ocean records to help in our understanding of weather/ocean interactions,’ said Zhang.

Taller than a six-storey building, the mighty wave occurred after a ‘very strong’ cold front had barrelled through the area.

‘Despite the huge strides in satellite technology, the sustained observations and data records from moored and drifting buoys and ships still play a major role in this respect.’

The North Atlantic, from the Grand Banks underwater plateau off Canada to south of Iceland and the west of Britain, is the world’s biggest breeding ground for giant waves.

HOW DO YOU MEASURE A WAVE?

The buoy which recorded the wave is a part of the UK Met Office’s network of Marine Automatic Weather Stations. Moored and drifting buoys form a vital part of an extensive international observing network coordinated by WMO and its partners.

They complement ship-based measurements and satellite observations which monitor the oceans and forecast meteorological hazards on the high seas.

Wave height is defined as the distance from the crest of one wave to the trough of the next.

The term ‘significant wave height’ means the average of the highest one-third of waves measured by an instrument, and is comparable to what an observer would see as an average of about 15-20 well-formed waves over a period of about 10 minutes.

The height of a wave is defined as the distance from the crest of one wave to the trough of the next.

The UN agency occasionally reveals quirky weather-related milestones, like its September finding that an August 2012 lightning flash in France was the longest-lasting bolt ever recorded.