He was discovered, quite by accident, in a small village far outside the city of Katmandu. At the time, few knew what to do for him. Now, 11-year-old Ramesh Darji has seen his personal plight, including his extremely rare medical condition, become an international cause, and call for help.

Ramesh Darji was just 15 days old when his skin started to peel – only to be replaced with thick black scales.

Now the 11-year-old struggles to even enjoy play time, as his appearance terrifies other children leaving him isolated from the world around him.

The rare and incurable skin condition Icthyosis has stolen away the youngster’s ability to walk and talk as the painful scales harden and twist his limbs.

Nanda said: “His skin started peeling off 15 days after he was born and then new skin began to grow very thick.

“It hardened and turned black, we had no idea what to do about it. No one helped us.

“By this fifth birthday he began to say his body was in pain and he couldn’t walk.

“He’s never really been able to explain anything to us either.

“He is only able to inform us when he’s hungry or wants to use the toilet.”

Doctors were stumped by Ramesh’s tragic plight, assuming that he was suffering from a fungal infection.

But even after discovering his child was suffering from Icthyosis, father Nanda – who works as a laborer in their native Nepal earning £44 a month – could not save enough money to treat the boy’s debilitating condition.

Nanda told the Mail: “He used to sit and cry but we didn’t know what was hurting him or how to help him.

“Any young child would see him and run away crying. It was hard for him and us to watch.”

But Ramesh has managed to take the first steps towards dramatic recovery – thanks to British pop star Joss Stone.

Stone, who backs local charities while on tour, used a performance in Kathmandu to raise money for the long suffering child to receive treatment that will help him live with the condition.

Raising £1,375 through the Joss Stone foundation, the singer songwriter went on to spend the next day with Ramesh, showering him in gifts and chocolates. 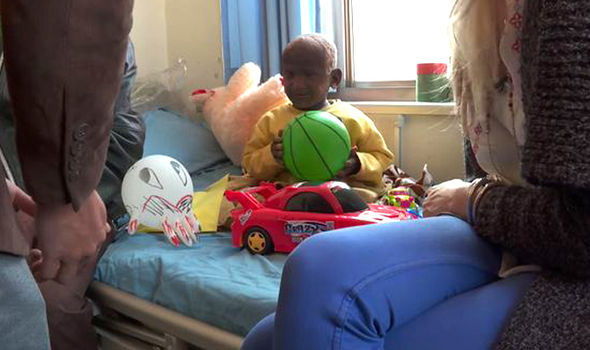 And the treatment he received as a result of the foundation has already helped his speech return.

“In many cases, people have cracked skin which resemble the scales on a fish.

“He was in a really bad state when he was admitted. We had to remove the scales from his body and it was painful.

“But since his bones and muscles were not weak by birth we can try to work on them and with some physiotherapy I’m hopeful we can make him stand again.”