A shocking report last week claimed a White House intern flashed a “White Power sign” while posing for a group photo with President Trump. The Daily Mail broke the story in breathless terms, and the headline traveled far and wide.

Check out some of the other headlines on the pressing issue:

Newsweek: Did a White House Intern Use a White Power Symbol in Trump Photo …

The Hill: White House intern appeared to use white power sign in photo with Trump: report

According to scholarly research, the historic “OK” hand sign has been adopted by the alt-right as a sign meaning white power. Please observe this useful guide:

With this useful knowledge, The Daily Caller researched some notable political leaders and activists of the day to find out how prevalent these secret messages were. Our discoveries were shocking. We originally found the use of the hateful symbol prominently in the Milo/Trump circles (no surprise there).

But digging deeper, we discovered a stunning truth: Many liberal heroes in America are subtly endorsing a white power message. Don’t believe us? Look at the indisputable evidence below:

Bill Clinton: Wow, how could you?

Chuck, how could you have made this poster?

The most liberal mayor in America, Bill De Blasio: Horrific

Interestingly, the media outrage prompted Breuer to respond to the controversy last Friday. In a statement made to The Daily Caller, Bauer said the sign was meant to be the classic “OK” hand sign, stated he was proud of his Jewish heritage and rejects white power groups. 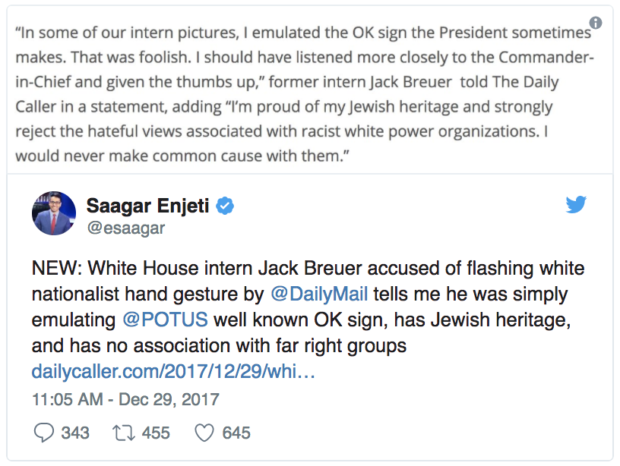 “In some of our intern pictures, I emulated the OK sign the President sometimes makes. That was foolish. I should have listened more closely to the Commander-in-Chief and given the thumbs up.I’m proud of my Jewish heritage and strongly reject the hateful views associated with racist white power organizations. I would never make common cause with them,” Breuer told White House correspondent Saagar Enjeti.

We’re glad Breuer cleared that up. Now for Hillary, Bill, Obama, Pelosi, Schumer and De Blasio to answer for what they’ve done.