To begin , my usual introduction ; I apologize for possible grammatical error , Know that I am a French author who publishes in English , to broadcast to as many people the truth about our history that is lost in the maze of time and which was also hidden from us.

In life there are three types of mysteries, the ones you will never know the answer; which is God? What is there after death? The second, a classical mystery, which has not yet found the answer, and the third category: the answer is known, but kept secret…

We all know that the explanation of the tomb is wrong because everything is inconsistent first and above all that each of us has intuition and inner conviction, as a legacy etched in our unconsciousness.
Why have not we the true explanation of this mystery, we all researchers with scientific and technological means?

Simply because the Pyramids are not a mystery but a secret .

I published last week an article about a man who had received a message from Heaven who warned of a “Flood” that comes and he had discovered the most amazing secrets of mankind.

Here, one of his discoveries and the response of one of the greatest enigmas of humanity and if this was kept secret, it’s because the pyramids are related to a warning left by these builders in connection with a threatening planet, more known as Planet X.

If you like beautiful stories and puzzles then you’ll really appreciate reading.

Here is his discovery…

The result of my research I want to share with you.

Many wonder why persit with the Egyptian cubits?

Because we think that behind the Egyptian cubits, hide symbols and universal mathematical relationships.

A brief digression to understand how I discovered that there were four cubits with excerpts from Discussion Forum with Egyptologists.

A message that makes sense when I was only three cubits:

” I remember to have posted this on my post ” New Cubit Theory ” and my three cubits:

answer to make; putting the coast at the moment and observe the other three … “

“Tell me honestly what is the practical significance for the Egyptians to have four cubits?

This is nonsense and a source of complication in everyday life.

My hypothesis is that these cubits actually have a hidden meaning. “

When I challenged the official value of the Royal cubit 0.5236m with my debater makes me a mathematical proof.

I read and my first primary human reflex is to seek a bug.

Then I started thinking (yes it happens ).

As I can not deny your value 0.5236 and that I can not also at the same time reject my own cubit, not by ego but by the results they give me:

there is something wrong, so to speak …

I discovered amazing things in my book, things that were literally before our eyes and no one has seen; Why ? because we were not looking in the right way …

And I feel that with the cubit, is exactly the same.

Our mind is completely frozen on one Cubit and we have never asked the question:

and if there was not a cubit, but only mathematical ratios?

Say that the pyramid’s dimensions not give us one, but multi information at the same time.

Every Cubit is a mathematical relationship (0.5236= Pi / 6 ) would be a certain way as a filter that would give each information.

So instead of fighting with our cubits, unite her… “

My debater shows me a mathematical representation of the King’s Chamber:

The sum of all root exponent equals 100.

“Someone on this forum is there a breakdown of building blocks of the room?”

To be honest, one block from the intermediate passage between the bedroom harrows and extends slightly king bedroom on the east wall of the latter, bringing the number of blocks to about 99.2.”

In short, you understand…

And with this detail I understood that Royal Cubit (0.5236 ) had a function.

First, the values and the symbolic meanings:

The Cubits are linked with the Golden ratio 1.618 and the three basic geometrical figures.

It is the official Cubit, it is the starting point in the plan of the builders, we find it in the dimensions of the king’s Chamber.

Used in all its accuracy, it symbolizes mathematics, geometry, the language used. 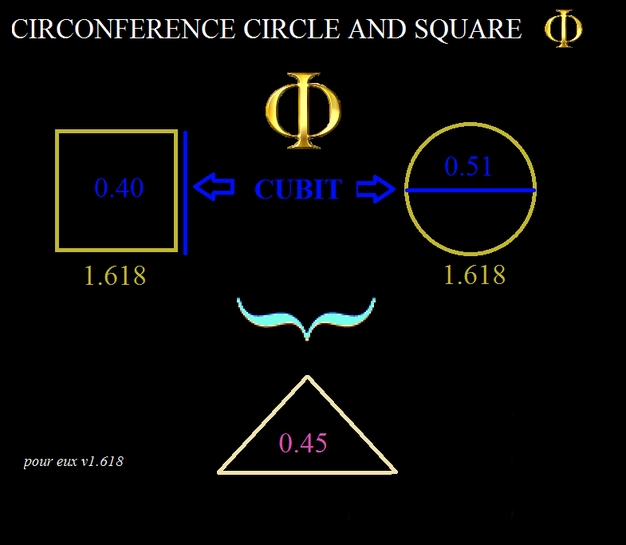 It symbolizes the square and the moon.

It symbolizes the circle and the sun.

It symbolizes the triangle, pyramid, earth.

Before starting and for those who do not understand why associate mathematical relations with the metric unit, you should know that the meter is a creation of the builders of the pyramid, which was then establish by Franc- masons giving the definition of being a quarter of a meridian (thus circle 4…) to scale 1/10.000.000eme, more info here.

Each pyramid is associated with a Cubit of its own, with the exception of the pyramid of Cheops which is the mistress pyramid, the mother of all the pyramid and it is what allow us to understand the plan of the Builders .

The pyramid of Cheops, symbolizes, but not only, the three geometric figures bases: square, circle and triangle exactly like the three cubits.

To be more readable and understandable to as many of you,I will explain the similarities and “coincidences” in the form of drawings and symbols.

The first picture speaks for itself, it explains that the pyramid is mathematically any sphere.

The latest archaeological dimensions of the pyramid are used.

The following shows that this sphere is the Earth.

Three cubits will act here as three keys on the pyramid of Khufu and reveal the plan of the builders.

Here are the bent double digit after the decimal point.

(For egyptologist who ask me archaeological evidence: the circumference of 40,000 of the pyramid of Khufu also corresponds to 40,000 vases found in the pyramid of Djoser …) Antiquities Muséum
On my previous sketches I bent my Moon cubit intervene directly on one side of the pyramid but I’ve realized that taking blow after one side of the pyramid that fell on the moon size, because it is 1/4 of the earth! (We understand at the same time, the extraordinary depth of the Plan Builder, for the moon cubit is a reminder 1/4 of a square, which itself symbolizes the house ( Our house, The Earth ), in countless cultures … )

I realized later that it was a mistake that the moon cubit did not intervene here …
When I discovered that the Pyramid symbolized the Earth during the writing of my book, I had enjoyed making comparisons between the two pyramid and the other planets, but I did not find any similarity.

I have always had a strange intuition that Mykérinos (smaller) can be the moon, then I redid my calculations with GOOD KEY, Moon cubit.

Many disparities in official measures of 102m to 106m …some logical view it over “4000 years” and above it the smallest and therefore more fragile.I use that of Wikipedia is a good intermediate.

“The base of the pyramid is an almost regular square 104.6 meters on each side. The faces of the tilt angle here is 51 ° 20 ‘with rising initially monument nearly 65 meters high”  Wikipedia

The Pyramid of Khafre is a planet and as there can be no planet between the Moon and Earth, the builders send us a message…

This is Planet is an ANOMALY.

I discovered amazing things in my book, information and messages, but I was missing one thing:

I never believed in this theory.

Yet it solves the idea of warning and thus a mandatory cyclical.

I do not fit into the subject more as there’s info on the web.

What follows is you will see quite pleasant and it’s the kind of enigma that I appreciate solve.

In their comprehensive plan, the builders of wear out all their energy and intelligence to provide us with information.

So if we follow the reasoning we should be able to have information on this pyramid and therefore on this planet.

As I become familiar with the method of calculating it will be very fast.

Yes, but what cubit use, Earth, Moon, Sun?

And that’s where I’m proud of myself, because I know where it is hidden

IN THE KING’S CHAMBER.

There is in the King’s Chamber

Take 2 minutes to find it.

(I put 1 mn to find, 5 minutes for the change and 6 hours to take the first solution!)

And the one who told me that the stallion is the guy lying, out there …

These small holes had always intrigued me and I knew in my heart that they had a purpose.

why then, the builders they placed only on one side?

These are not holes for a locking system but the symbolization of four standards and therefore four cubit.

I have in my possession three stars cubits (Moon, Earth and Sun) is the fourth Planet X Cubit

The total length is therefore 227cm63:

Now that we have the Cubit X  and we have the dimensions of the pyramid we can calculate its size.

There are many subtleties and pitfalls to avoid.

I had corrected the size because I followed my thoughts instead of following the logic.

I got 9450 km at the beginning but I thought it was a mistake because the Khafre pyramid should have been smaller than Mykérinos.

I modified the calculation using the royal cubit to find a dimension to roughly similar to the pyramid (43000km) but I was following no more logical flow and thus betrayed consistency.

I understood the significance of the large size of Khafre in relation to its dimensions:

This is his MASS.

She’s almost as massive as Earth with the size of the Moon.

See Appendix Planet x and my last truth. (Spring Equinox 2022 if you are tired to read or in this updated video, who you’ll better appreciate and understand, after reading this article)

And all this with only stones …

Please share, because it is the only manner for the moment to broadcast the truth about our history and even our future …

Be prepared, Prevent your families and God Bless you.