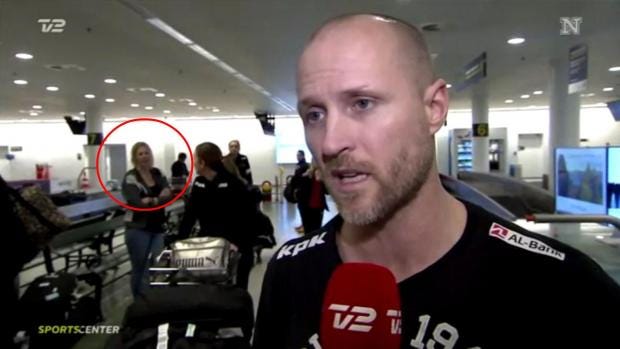 A woman at an airport chats to fellow travellers, turns to grab her suitcase from the conveyor belt… and vanishes into thin air without warning.

No, its not one of those logic riddles you used to bend your cranium around as a kid: a clip showing precisely that happening live on Danish television has left people’s heads spinning.

WHERE DID SHE GO?!

During an interview at an airport on the SportsCenter show on Denmark’s TV2 channel, a blonde woman to the left of the frame in the background chats to another passenger as she awaits her luggage.

As her pal passes by with a bag trolley, the mysterious woman appears to evaporate with David Blaine-esque panache – leaving no trace of her former presence next to the carousel.

Who is this magic person? A witch? A ghost? Doctor Who’s latest companion?

Predictably, Reddit users had a range of theories about what went down.

So? Everything disappears in baggage claim.

Others got spectral with it

And the rest just needed an answer right now

I’ll need an explanation, thank you.

Whatever the truth is, spare a thought for the beardy guy who was being interviewed – his big moment on the small screen will forever be remembered for a woman who may or may not be an alien.